A bit less than 3 weeks before first rallies, the famous « entry list » of next edition of Play In Challenger has just been released. Always to be considered with cautious, since players having the possibility to withdraw until the last moment, this list is exciting and should offer us fantastic matches from 21st March on Tennis Club Lillois Lille Métropole ‘s courts !

This third edition will be of course highlighted by the presence of « country kid », Lucas Pouille. The loonois, who was away from courts during a long time, due to right elbow injury, came back to competition at the beginning of the year. Lacking of matches and results, it is « at home» he will try to recover with success and confidence. Winner of 2017 Davis Cup in Pierre Mauroy Stadium, ranked 10th in 2018 and 5 ATP titles, the Grande Synthe native will be very expected. A shame the crowd will ne be able to attend to these emotional moments. …

Another well known player: Grégoire Barrère. The two times winner of Play In Challenger will be back once again this year, and will try to capture the title for the third time in a row! Experiencing difficulties since the ATP tour restarted at the end of last year, the French player shined last week in Montpellier, and seems to be on the right way again …

We will also find out French players who recently shined on the ATP Tour: Benjamin Bonzi, winner in February of his first ATP challenger in South Africa, and who upset Lucas Pouille in Montpellier ; Alexandre Muller, who reached the second round in Australian Open, but also Antoine Hoang, Arthur Rinderknech (winner this year of Istanbul challenger), Mathias Bourgue, Quentin Halys, and the two “local players” : Constant Lestienne and Maxime Janvier.

From foreign players, the young and talented Finnish gun Emil Ruusuvuori will have to be followed closely. Ranked 85th at only 21, he especially upset Gaël Monfils in Australian Open first round this year.

We will find out with pleasure Dutch player Robin Haase, well known of Tennis Club Lillois Lille Métropole’s fans, for representing the club during several years in the frame of France Team meetings.  The sympathetic and funny German Dustin Brown is back thisyear in Play In Challenger, as also Serbian Viktor Troicki. Ranked 12th in 2011, winner of Davis Cup in 2010 against France, he will be another big name of this edition.

Play In Challenger will be live broadcasted every day on our Facebook page and Internet website of the tournament (www.playinchallenger.com), as also ATP Tour website. Semi-finals broadcasted on tv.fft.fr and final on beIN Sport, on Sunday 28 March at 3 PM. 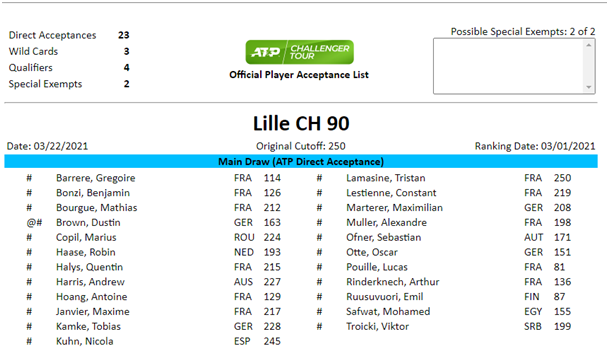 PLAY IN CHALLENGER IS COMING BACK IN 2021: BECOME VOLUNTEER ON THE GREATEST MEN’S TENNIS TOURNAMENT IN THE NORTH OF PARIS!

New final for Grégoire Barrère, who will be faced to Zizou Bergs

President’s editorial : public is back, at last!